Samsung SDI, a manufacturer of batteries and electronic materials, is working on an ambitious plan to start producing cell phone stack batteries. It’s a technology inherited from the electric car, and which makes it technically possible to increase the energy density of batteries without increasing their size. It’s a far cry from solid-state or dual-power batteries as it’s a more realistic approach in the short term.

This would allow Have larger capacity batteries without sacrificing the size of the devices, something important in an era of battery stagnation. Breaking the 5,000mAh barrier could be closer, although there is still work to be done.

Stack batteries as a solution to the problem 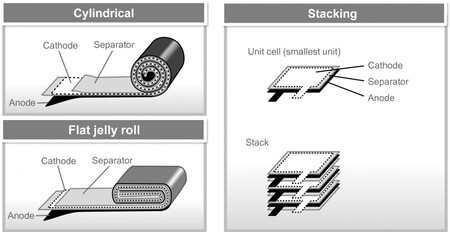 Phone batteries haven’t grown in years. We seem to stagnate between 4,500 and 5,000mAh (with a few exceptions) and it is that increasing their capacity would come with scaling up. According to Korean industry sources Samsung is working on increasing the energy densityconsidering the same current size.

For this purpose, stacked batteries in layers, a technology used in some of the latest generation batteries for electric cars, will be used. According to the source, Samsung SDI is already testing the production of this type of cell phone battery at its factory in Cheonan, South Korea. An investment of $85 million is expected equip its production lines with the necessary material to manufacture them and set up another pilot line in Tianjin, China to speed up production.

The stacking technology offers interesting advantages such as a long lifetime, a better use of space and a high capacity in terms of energy density. Compared to current technology, can increase the energy density by 5-10%extending battery cycle life by up to 10%.

In this type of stacked batteries, the charge-discharge cycles will increase over time The temperature distribution is relatively even, which creates less stress in the cell. The manufacturing complexity is greater, so it is not expected that this type of battery will be available until 2022. However, using these resources for mass production does not rule out seeing a Galaxy S23 with this technology.